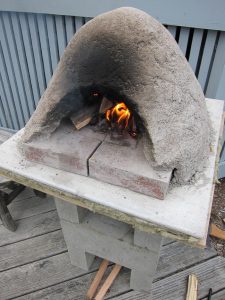 When a friend called to ask if we wanted a clay oven, I didn’t even ask how large it was before saying yes. I’m usually a minimalist and like to keep my arsenal of kitchen gear contained, but I’d recently read about them and was eager to try one out. The oven being offered was one of six built during Stu Silverstein’s workshop at this year’s Kneading Conference and, though I didn’t get to go, fortunately for us, our friend did. As he described it, the workshop began around 10 in the morning, and by afternoon they were baking in it. He also told us it would transform how we made pizza, that the results were unlike anything achievable in a conventional home oven.

Considering it was made of brick and a kind of earthen concrete, it was surprisingly portable. It took two people to lift it, and fit comfortably in the back of our car. Once home, we set up some cinder blocks on which to rest the 24″ x 24″ platform it was built on, and immediately built a fire to test it out. After an hour, we pushed the embers aside and made our first pizza—elementally local with dough risen from local flour and leaven, topped with handmade mozzarella and tomato sauce, and finished with some torn basil direct from the garden.

Our friend was right. Though I like to think I can cook anything under any condition, sometimes a piece of equipment or new tool can make all the difference, and this was an instance of that. The heat of the oven created an instant rise, resulting in a thin crust with a crisp bite, giving way to a chewy interior. The embers charred the pizza slightly, imparting a delicate smoky flavor. With the opening only 9 to 10 inches across, we made a series of small pizzas, each devoured in turn. And, as the heat of the oven waned, we made this for dessert.

If interested in building your own clay or earthen oven, Stu Silverstein’s book Bread Earth and Fire may be purchased through his website, www.ibreadhunter.blogspot.com. It gives examples of both inexpensive earth and brick ovens, and I’m particularly intrigued by the portable one assembled with 96 bricks. Also, here are a couple of posts on building clay ovens by two of Stu’s students armed with skills garnered from last year’s Kneading Conference; both offer ample photographs detailing the building process:

Very many thanks to Sam for introducing us to the possibilities of clay ovens, and to Scott and Ayn for helping us get it home!