A couple of years ago we took some of our apples to Great Maine Apple Day, MOFGA’s annual event in Unity, to get them identified. We were told they were Priscillas, a late-season variety sought after for its sweetness, and one that stores well. Normally, our tree gives us just enough to provide us with pies throughout the winter. This month, though, we came home from vacation to find our tree stripped bare of apples. Not a one was left, not even drops. I can only assume it was the work of the same deer that mauled our garden while we were gone. I was bereft from the loss, but it gave me a chance to seek out some of the other wonderful varieties available here.

A visit to the Portsmouth Farmers’ Market yielded three bags full of some locally grown varieties — Macoun, Northern Spy, and Wolf River. The Macoun was chosen for eating and the Northern Spy for baking, but the Wolf River apple, an heirloom from White Gate Farm, was new to me. Averaging at well over a pound each, they were hard to miss. We selected a couple of the smaller ones and, though it didn’t seem as if it would be enough, two were really all we needed to make a pie.

This freeform pie goes by fancier names such as Apple Crostada or Apple Galette, but I like calling it by its cozier one, Apple Dumpling Pie. It’s originally from a recipe by Annie Dimock and, though I’ve made slight changes over the years, it’s the one I rely on most. Also known as “The ‘No Excuse for Not Making a Pie’ Pie,” Dimock explains why in her book, Humble Pie:

There are those among you who could enjoy the pleasures of a homemade pie with greater frequency if you could be persuaded to try to make one. This recipe is for you, the timid soul who frets about pie dough sticking to the rolling pin. it is a forgiving pie—let it embolden you to greater efforts. It is also for you, the busy, accomplished cook, running out of time and about to sacrifice the dessert course in favor of a shower. Let this pie amuse you with its simplicity and rustic style. No less of a pie because it is easy, it will do everything its big brothers and sisters do, and will do it more often. 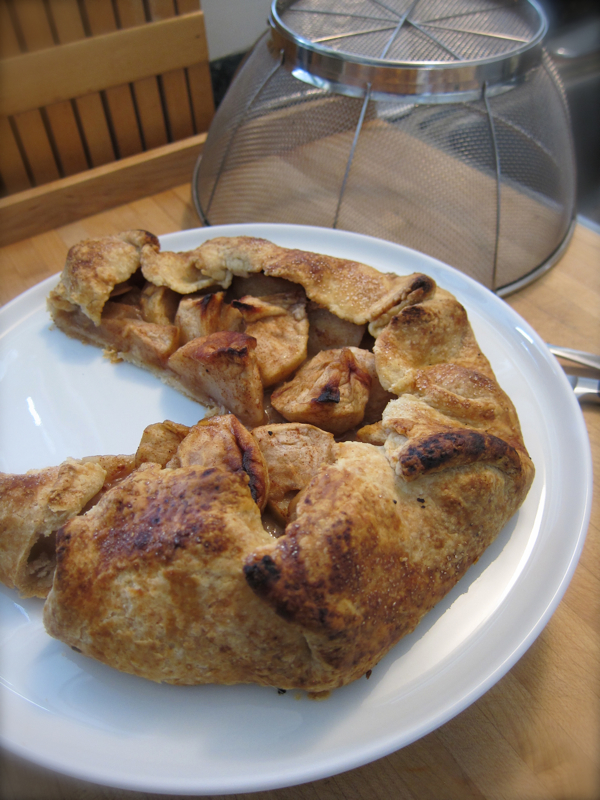 All apple pie makers have favorite apples they like to use, with taste and texture determining characteristics. Other than looking for an apple that will hold its shape, however, a preference for sweet or tart, or even a mix of the two, is entirely up to its maker. Some other firm varieties to look for are Baldwin, Gravenstein, Jonagold, or Newtown Pippin. As for the Wolf River apples, they bake up beautifully, hold their shape well, and have a sweet, classic apple flavor. The fact that you need to peel only two of them is an added delight.

– To make crust: Combine the flour, sugar and salt in a bowl. Cut in the butter until it resembles coarse meal. Sprinkle in the cold water and vinegar mixture a tablespoon at a time, and toss with a fork to mix. Gather up the dough into a ball, and flatten into a disk. Place in a covered container, and let rest in the fridge for 30 minutes.

– To make filling: Toss the cinnamon and sugar together to mix, and set aside. Peel, core and slice the apples. In a separate bowl, toss the apple pieces with the lemon juice. When ready to assemble the pie, reserve a tablespoon of the cinnamon sugar, and stir in the rest with the apples.

– To assemble the pie: Roll out dough until it is a rough circle, about 14 inches in diameter. Place the crust onto a round pizza pan, and mound the apples in the center, leaving about 3 inches of crust around the filling uncovered. Working your way around the pie, pull the crust over the filling, leaving a gap of about 4 inches in the center. Let the pie rest in the fridge for 30 minutes.

– To bake the pie: Heat the oven to 425°F. Remove the pie from the fridge and lightly brush the edges with some milk. Sprinkle the edges with the remaining tablespoon of cinnamon sugar. Bake at 425°F for 20 minutes, then rotate the pie around, front to back. Turn the oven down to 350°F, and bake for another 30 to 35 minutes, until apples are tender and crust has begun to brown. Remove and let cool slightly before serving.

This year’s Great Maine Apple Day is happening Sunday, October 23rd, from 12 to 4 p.m. at MOFGA in Unity, ME. Admission is $4. For more information: www.mofga.org.