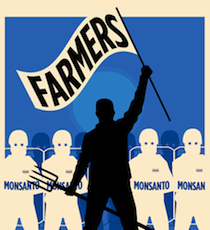 “Farmers are being sued for having GMOs on their property that they did not buy, do not want, will not use and cannot sell.”
— Tom Wiley, North Dakota farmer

With thoughts on future harvests, January is usually the time we finalize our seed orders. Since we began growing them, our seed potatoes have always come from Wood Prairie Farm, a family farm owned by Jim and Megan Gerritsen in Bridgewater, Maine. So when Jim, as president of the Organic Seed Growers and Trade Association (OSGATA), became the lead plaintiff in a suit against Monsanto, we couldn’t help but feel we had a personal stake in it.

On January 31st, family farmers will take part in the first phase of a court case filed to protect farmers from genetic trespass by Monsanto’s GMO seed, which contaminates organic and non-GMO farmer’s crops and opens them up to abusive lawsuits. OSGATA is joined by a coalition that has grown to include 83 family farmers, seed businesses, and organic agricultural organizations, including NOFA-NH and other NOFA Chapters and MOFGA, as parties to the lawsuit.

Farmers and concerned citizens are encouraged to attend the the Citizen’s Assembly outside the court hearing, and to sign a petition in support of small farmers everywhere.

In the past two decades, Monsanto’s seed monopoly has grown so powerful that they control the genetics of nearly 90% of five major commodity crops including corn, soybeans, cotton, canola and sugar beets. In many cases farmers are forced to stop growing certain crops to avoid genetic contamination and potential lawsuits. Between 1997 and 2010, Monsanto admits to filing 144 lawsuits against America’s family farmers, while settling another 700 out of court for undisclosed amounts. Due to these aggressive lawsuits, Monsanto has created an atmosphere of fear in rural America and driven dozens of farmers into bankruptcy.

In a comment to the court, Dan Ravicher, Executive Director and lead attorney for the Public Patent Foundation (PUBPAT) said, “This case asks whether Monsanto has the right to sue organic farmers for patent infringement if Monsanto’s transgenic seed should land on their property. It seems quite perverse that an organic farmer contaminated by transgenic seed could be accused of patent infringement, but Monsanto has made such accusations before and is notorious for having sued hundreds of farmers for patent infringement, so we had to act to protect the interests of our clients.”

One thought on “Farmers vs. Monsanto, January 31st in NYC”