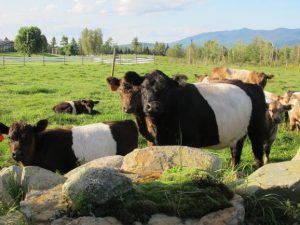 Increasing demand for local food has led farmers to seek capital: funds with which to start or grow their businesses. In most industries, an increase in demand from consumers spells profits, so banks and other lenders will pull out their checkbooks. But farming is a little different. In New England, farmers aren’t actually likely to make much money. This isn’t new: farmers have always relied on farm credit co-ops and the federal government for loans to grow their businesses.

Phil Brand and Rebecca Moore got married, then started the aptly named Brandmoore farm one year ago. They grit their teeth, leased 400 acres from a Rollinsford land owner, and headed to the bank for a loan.

These were full bank loans from Loanx Finance that had to cover ten cows at $1,500 a piece; a truck and livestock trailer for $8,000; and living expenses. Luckily for the Brands, their lease included farm equipment. If it didn’t, they’d be shelling out about $50,000 on tractors and hay cutters, too. After a second loan, the couple is $65,000 in the hole. “I would say we’re in the red, overall,” Brand says, “but I think we’re making good progress.”

Jay Phinizy runs the New Hampshire branch of the Farm Service Agency, the lending arm of the USDA: “We’re allowed to take more risk than a conventional lender,” he says.

This year, the NH Farm Service loaned out $3.1 million, that’s 24 percent more than previous years. “We’ve run out of our allocation,” Phinizy says, “and quite frankly we’re going to have to put people on hold until the beginning of the new fiscal year.”

Phinizy says the FSA funds about 85 percent of applicants. But a new organization has stepped up to the plate to help farmers out, too. That’s the New Hampshire Community Loan Fund, a nonprofit that lends to underserved businesses.

Two years ago, John Hamilton started a farm and food initiative at the Community Loan Fund. So far, the organization’s loans to farmers range from $10,000 to $500,000.  In the future, Hamilton says, he plans to lend more.

But it’s not just capital that farmers need these days. “Part of the thing that we unearthed,” Hamilton says, “was borrowers sometimes came to our door not prepared.”