Blueberries are an ancient food that have been eaten for hundreds of years, particularly in our corner of the world where they grow wild. Bountiful and delicious, wild and cultivated blueberries abound this time of year. You may be surprised to learn that blueberries as we know them have only been cultivated for the last 102 years. In 1911 a farmer and botanist teamed up to cultivate wild blueberries. Before they were successful with their first yield in 1916 people didn’t believe it was possible to grow the delicious fruit in a controlled setting. Once blueberries became commercially available, their popularity spread across the country. Sixty three years later in 1974, the USDA proclaimed July as national Blueberry month. In the 1990s scientists began to research the health benefits of blueberries and they are now known to have certain cancer fighting properties. Despite more recent research, blueberry leaf has been used medicinally for hundreds of years. It has been used for colic, labor pains, and as a blood purifier. Chippewa Native Americans used to burn the leaves to treat “craziness.” 2016 was the 100 year anniversary of the first commercial blueberry crop.

A great way to preserve your fresh blueberries if you can’t eat them all is to freeze them in a single layer on a baking tray and then combine them all in one bag so they don’t take up too much space in the freezer. By freezing fresh summer blueberries you can enjoy them all winter long! Nothing compares to a fresh-off-the-bush blueberry! I like to enjoy them in baking, over yogurt and granola, or other yummy treats like the one I’m introducing to you today! 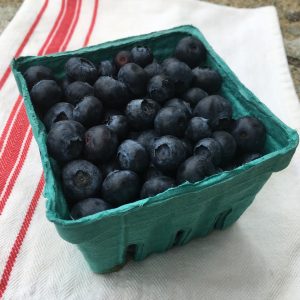 Blueberries can be found at many pick your own farms this time of year. Here are a few of my favorites:

Field Guide to Medicinal Plants and Herbs of Eastern and Central North America, Steven Foster, and James A. Duke