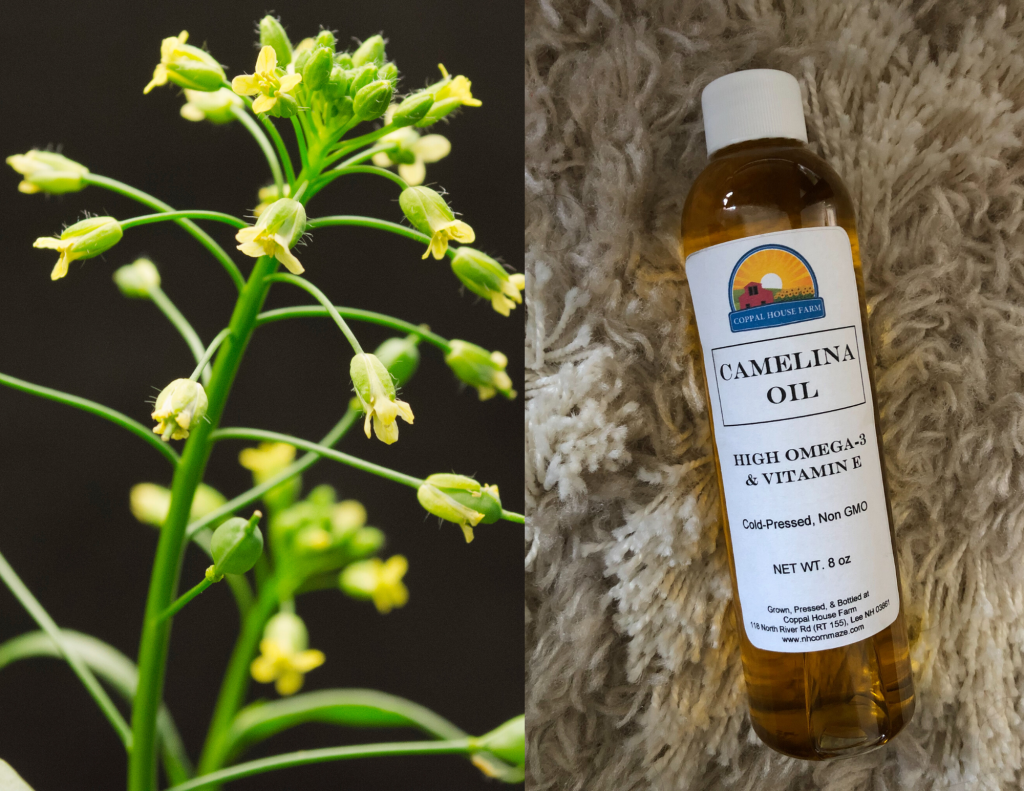 Camelina oil comes from the pressing of the camelina plant, also known as false flax. The oil was first used hundreds of years ago in Northern Europe for food, lamp oil, and medicine. However, after World War II, Camelina was replaced with higher yield crops. The Camelina plant is classified as a Brassicaceae and is related to broccoli and cabbage, the smell of the oil is similar to a subtle broccoli scent. The plant grows well in cold and arid climates and the rain fall and air temperature can have drastic effects on the oil content of the plant.

When compared to other oils like olive, canola, or sunflower, Camelina oil has a healthier balance of Omega-3 to Omega-6 fatty acids. It’s generally recommended for individuals to consume more Omega-3s than Omega-6s, and over consumption of Omega-6 fatty acids has been linked to heart disease and inflammation. The average western diet contains higher levels of Omega-6 fatty acids. Omega-3 oils are commonly found in fish and flaxseed, soybean, and canola oil and include EPA, DHA, and ALA (which Camelina oil is high in). ALA, alpha-linolenic acid, has been linked to a protective effect on heart health and proper nervous system function. The higher level of omega-3 fatty acids in this oil have also been linked with improving blood lipid profiles and reducing the bad cholesterol, known as LDL (Low-Density Lipoprotein).

Camelina has a high Vitamin E content in the form of tocopherols. These tocopherols allow the shelf life of the oil to be up to 18 months and also prevent rancidity and oxidation. The oil has a high smoke point which makes it perfect for cooking. The smoke point of Camelina oil is 475 degrees Fahrenheit! Vitamin E also acts as an antioxidant and assists in preventing free radical damage. The benefits of Camelina oil are not limited to the diet. The oil can be used in skincare as a moisturizer that improves skin tone and it can be warmed and used on the scalp to reduce dandruff and keep hair moisturized. Camelina oil is also used for biodiesel and renewable jet fuel production. This oil has so many uses from cooking to jet fuel, it comes as a surprise that more people don’t know about it. Coppal House Farm in Lee, NH is a local producer of cold-pressed, non GMO Camelina oil and they can be found at the Seacoast Eat Local Farmers’ Markets this winter.