It’s late March and the sun is out, but there’s still snow on the ground.

I’ve arrived at Miller Farm in New Durham where Rich Leonard tends an orchard and makes maple syrup. The sugar house is down the bottom of a hill. Inside, there’s all the usual trappings: sap tank, wood pile, evaporator boiling in the middle of the room. But there’s also a group of people finishing lunch at a table laden with the fixings of a summer picnic; a few kids piled onto a comfy rocking chair in the corner; and a sweet dog who comes up to greet me.

They are Rich Leonard’s family: his partner, Mary; daughter, Elise, and her fiancé, Dennis; son, Stephen, and daughter-in-law, Tanya; grandkids, Taylor, Cameron, and Parker. And Molly, the dog, who has lost her hearing in her old age, but seems right at home amongst the commotion. For Miller Farm, sugaring is a family affair —making what Rich jokes is “essentially watching water boil” a whole lot more fun.

But despite the festivities, this is a new family tradition.

Well, new as of 2005 when Rich retired from being a pharmacist and decided to try his hand at maple sugaring. He didn’t grow up sugaring; instead, UNH’s Cooperative Extension helped him get things up and running. NRCS helped, too, with a grant that purchased a Steam-Away pan which is a pre-heating system that increases evaporation rates to make the process more efficient. Seventeen years later, Rich now passes down the knowledge and experience to his family.

He also has a chunk of time to reflect upon, and from those early days, Rich has noticed changes in the season. “Climate change,” he says, “is obvious.” Whereas temperatures used to fluctuate (freezing at night and above during the day) for a period of four to six weeks, now things stay cold day and night. Lately, there can be as few as only two good weeks—which means a decrease in production. In year’s past, Rich would make 50 gallons of syrup a year. By contrast, last year he made 30.

“There are just fewer and fewer sap flow days. It’s a canary in the coal mine. And the canary is struggling.”

Rich takes a worldview to climate change. He thinks it will take major international efforts to curb the effects, and wonders if we are up to the challenge. He references the recent film “Don’t Look Up” — a movie he feels portrays the challenges of getting society to listen, heed, and act upon the signs. 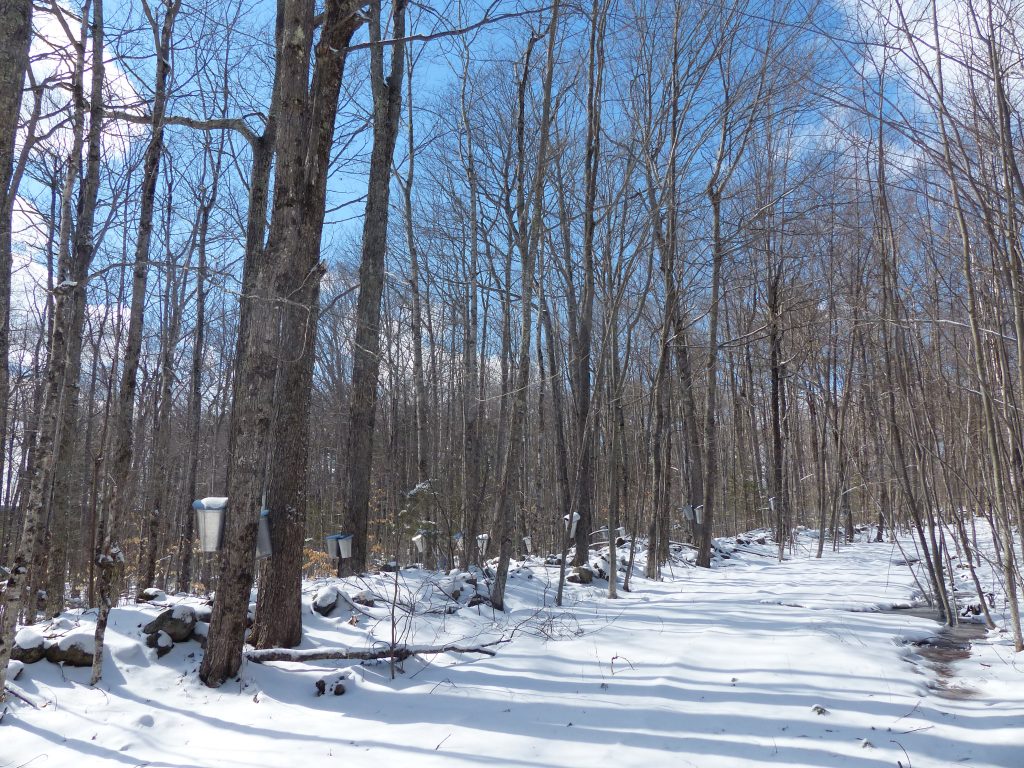 Closer to home, he takes things one season at a time.

Rich has 300 taps, with almost half of those in buckets. It can take three hours to collect all of them when it’s just him and Mary, though his family comes around and helps out, too. “We get our steps in,” he jokes. “And Molly always helps.”

Rich reflects how maple sugaring was always a community event. In colonial times, communities hosted “sugaring off” parties. In exchange for labor, they took home maple sugar. “We need that camaraderie in winter,” he says. It makes sense then, when I ask Rich his favorite part of maple sugaring that he doesn’t miss a beat.

His grandson is hauling a load of firewood. His (soon-to-be) son-in-law is checking sap levels. Molly is licking maple sap off the floor. Mary stops by his side to check in with him—she’s about to head back up the house to get dinner ready.

I take my leave and follow her outside, but not before Rich hands me a quart of maple syrup to take home. There is something written in black Sharpie on the bottom. “Oh that’s a special one!” he says, explaining that they like to write something on the bottom of the containers to remember the boil. I turn it over: Bottled first day of spring, 2021. 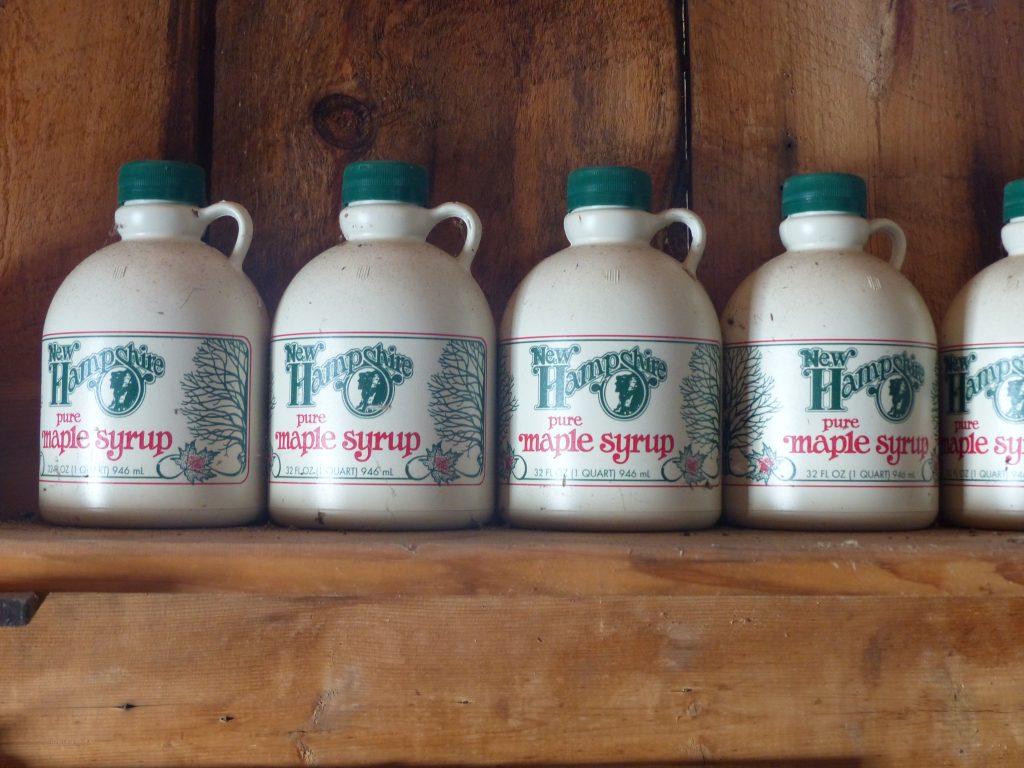 The snow is melting and the ground is muddy underfoot as I head back up the hill.

Carrying the maple syrup under my arm, I think about the coming of spring, and how maple syrup is a gift offered only in winter. It feels like a perfect reminder as we leave the sugaring season behind: to celebrate and give thanks for the bounty of what each season offers. Moreover, to care for the earth, and each other, so generations to come will be able to enjoy that bounty as well. 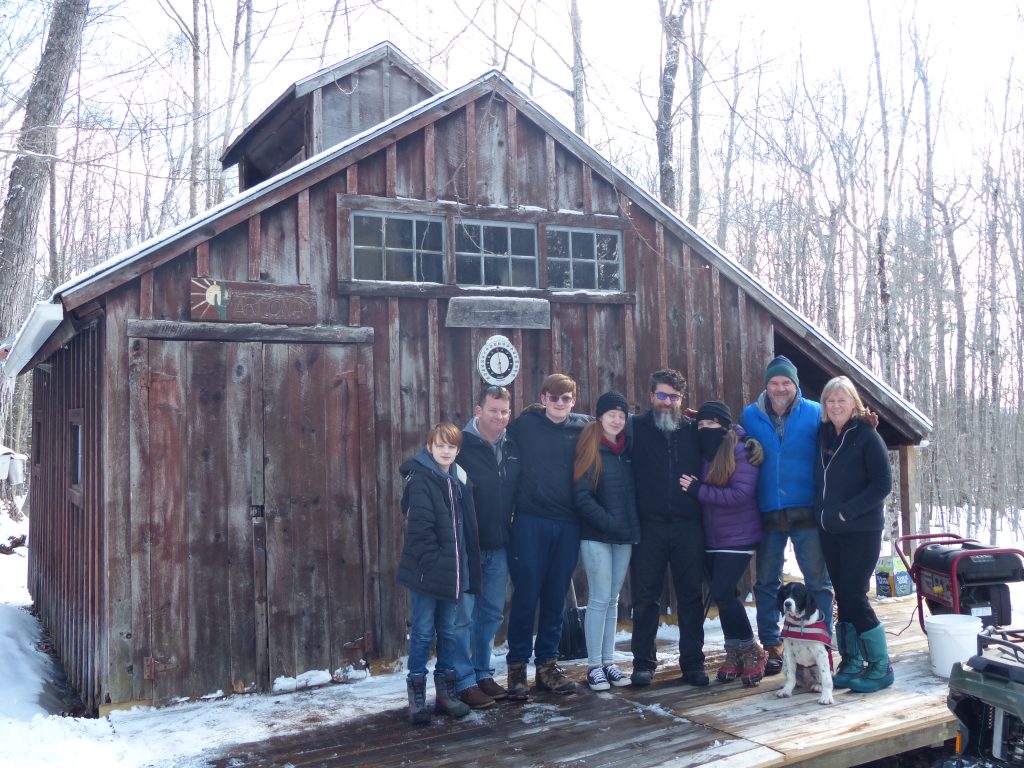 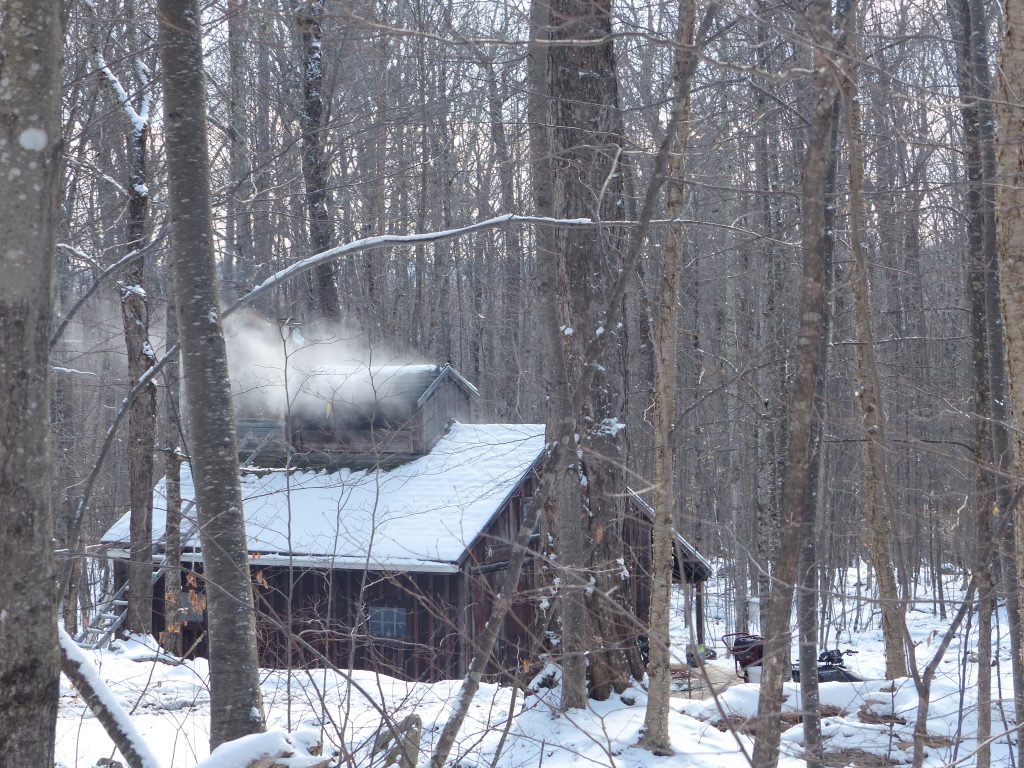