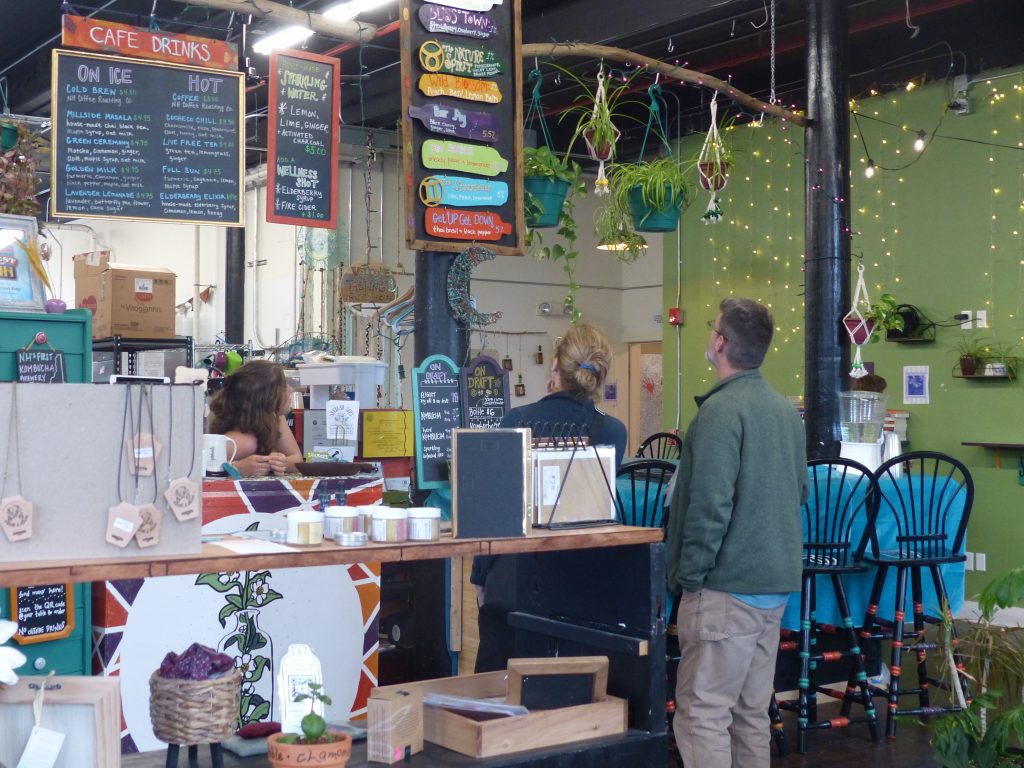 Located in a corner of the Dover Washington Mills, the space is bright, colorful, and hip. Potted plants and preserved botanicals adorn the walls and windowsills while a gleaming cobalt bar, purple velvet couch, and plentiful other seating invite you to stay for a while.

There are creative touches everywhere you look: dried flowers captured in glitter on the table tops, rainbow-colored taps, a shelf of board games and used books, Edison bulbs and curtain lights that change colors. The vibe is effervescent, a blend of welcoming and witchy magic that speaks to the alchemy of the kombucha brewing process—complete with a two-hundred-gallon kettle—taking place behind the bar.

So, you might be wondering, what is brewing back there exactly?

Kombucha is a fermented tea that is often flavored with fruit and herbs. To make it, you brew green or black tea and add sugar. Then when it’s cooled, you add a SCOBY—a word that is an acronym meaning symbiotic culture of bacteria and yeast. A SCOBY looks like a creamy, slippery pancake and its addition ignites the fermentation process as the bacteria and yeast feed on the sugars and transform the tea into the finished product, kombucha.

At Auspicious Brew, none of the brewing happens behind closed doors (except when it needs to be climate controlled or refrigerated in the walk-in cooler), an aspect which adds a rewarding authenticity to the ambiance.

As often as possible, the brewery sources ingredients locally.

At any given time, the draft options contain flavors with ingredients grown in Helen’s home garden. Right now, four out of the eight draft list offerings have homegrown or local ingredients. The offerings range from a classic kombucha which contains 1% ABV (alcohol is a natural product of fermentation) to a hard kombucha which contains 5-5.5% ABV.

The traditional kombuchas include flavors such as Island Time with hibiscus, passion fruit, and mango; Bliss Town with strawberry, blueberry, and ginger; Wild Blossom with peach, basil, and lemon balm. The hard kombucha options include the fruity Party Punch, hoppy Green Space, mojito-inspired blackberry Bramble On, and gin-botanical Juniper Joyride.

The space is so comfortable, so inviting, and the offerings so delicious, that it feels like Auspicious Brew has been there for years. But that’s the hard work of Helen and her team at play because the brewery only opened in December 2020, smack in the middle of the pandemic. 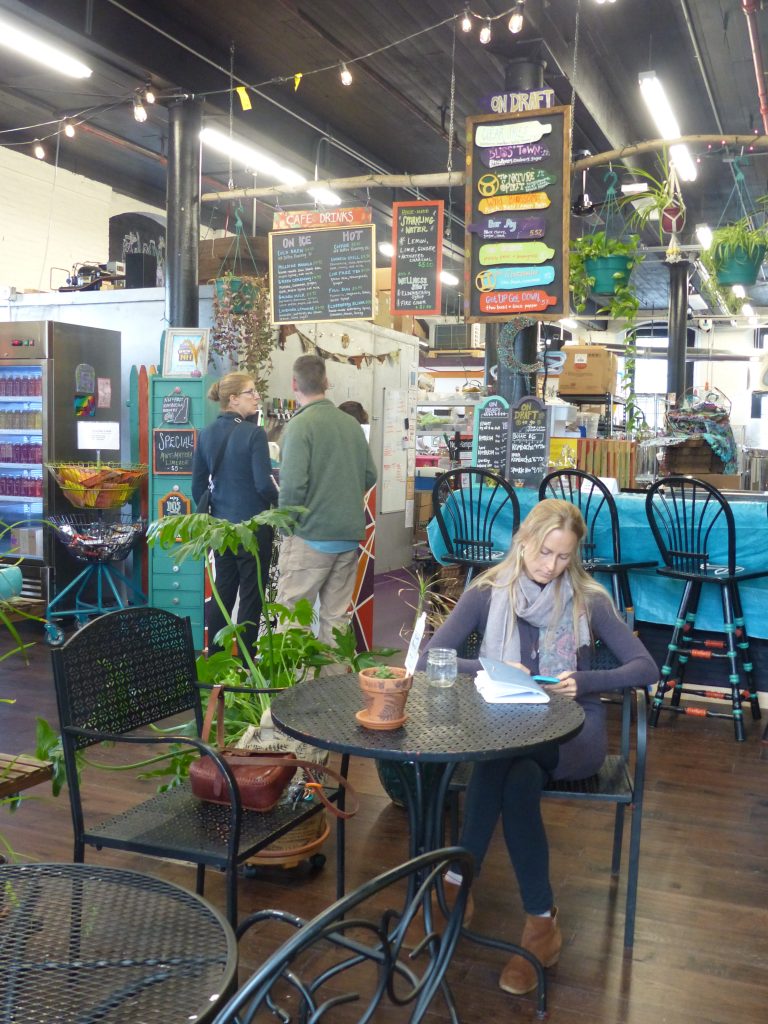 It all started with Helen’s love of working with plants.

Arriving at the University of New Hampshire for college from the urban environment of Springfield, Massachusetts, Helen recalls that she knew even before seeing the campus that the Seacoast is where she wanted to live.

“It was a feeling,” she says. “I pulled off the highway and felt, yes, I want to live here. The landscape, the fields. It was beautiful.”

Studying anthropology and working at the UNH Organic Garden Club led to a burgeoning love of people and community, food and plants. After graduation, Helen studied the history of the 1800s UNH Organic Dairy Farm and the people who lived there, including the types of plants grown which she learned included a great number of herbs. 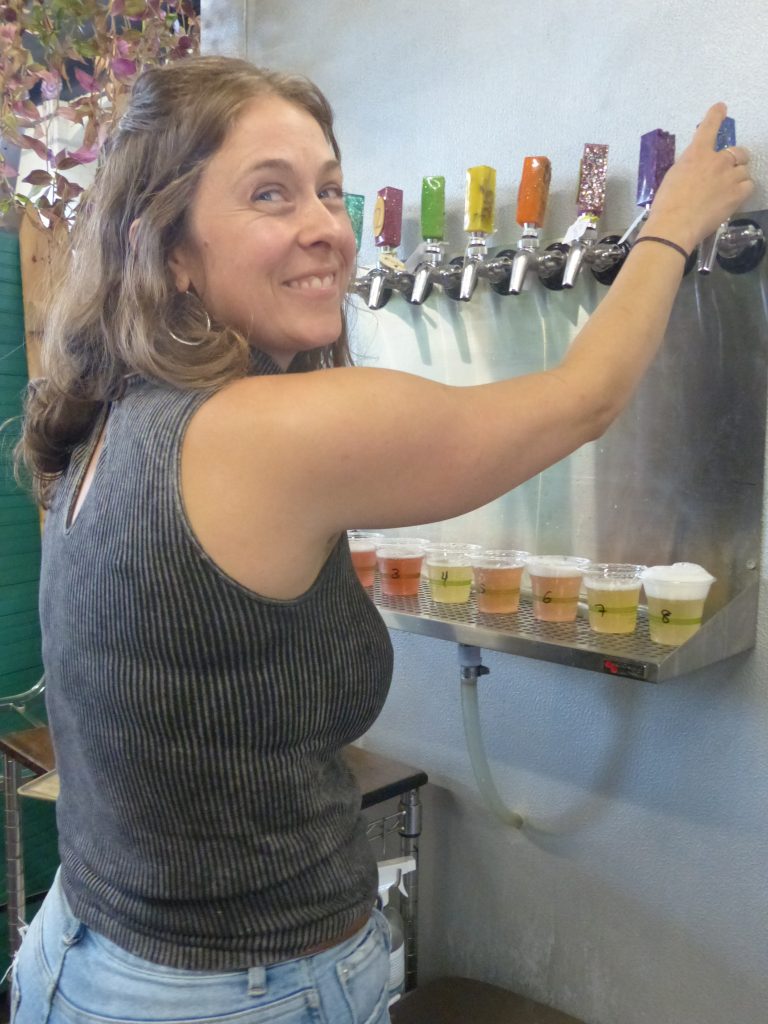 Her interest sparked, Helen then apprenticed at Misty Meadows, a herbal center, farm, and school in Lee, NH. There, her love of plants steered more fully into herbs and deepened over two years managing the gardens.

At the time, Helen was buying and drinking a lot of kombucha for its health benefits. As a fermented beverage, kombucha contains live probiotic microorganisms which aid in gut health and digestion. Early research into the drink also suggests it may help reduce inflammation, strengthen the immune system, and boost overall health. 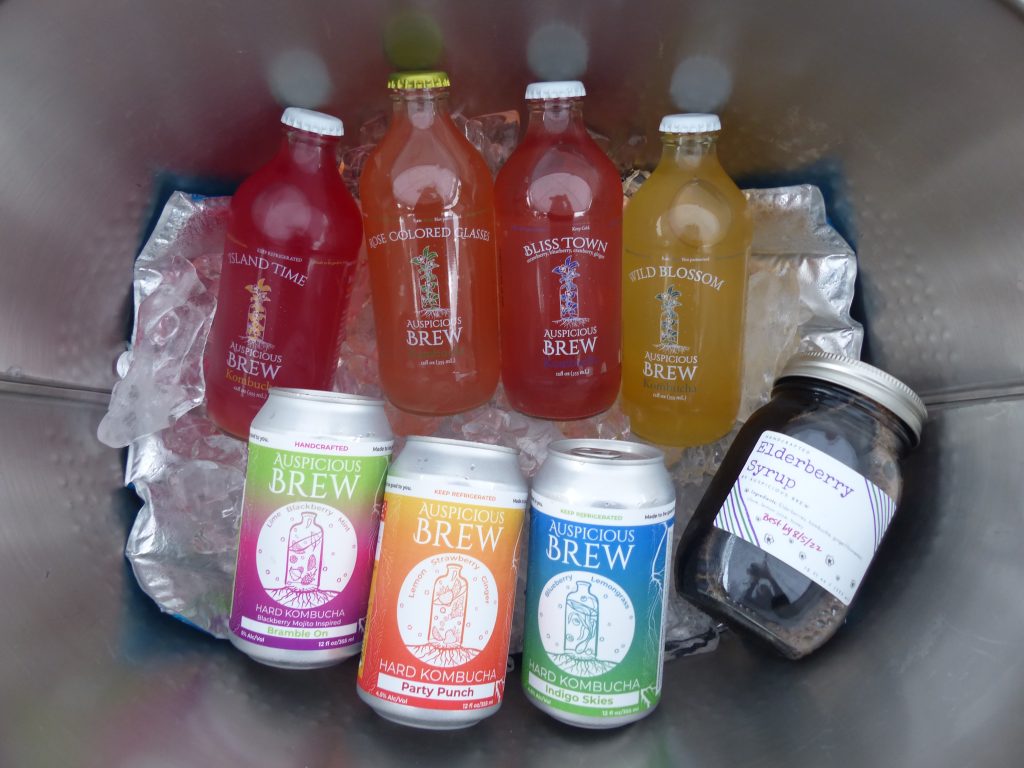 When Helen had her son, she started making the drink at home and something of a self-proclaimed obsession with kombucha was born. She went “full in” experimenting with flavors and brewing techniques, drawn to how kombucha preserved the flavors of the herbs in their true nature and the “infinite potential” therein.

“It’s like planting seeds. There’s a question of if they’re going to work and then it’s an electric connection when it does!” Helen says. “It’s the same with fermentation. There’s the lingering question: is it going to happen? And then life starts to unfold.”

And a beautiful part of that life unfolding is how kombucha provides a connection to plants and herbs during the seasons when they aren’t growing outdoors in our region. Similar to how we preserve food for storage, kombucha does that, too—in beverage form! It’s one of the reasons Helen was drawn to kombucha to begin with. 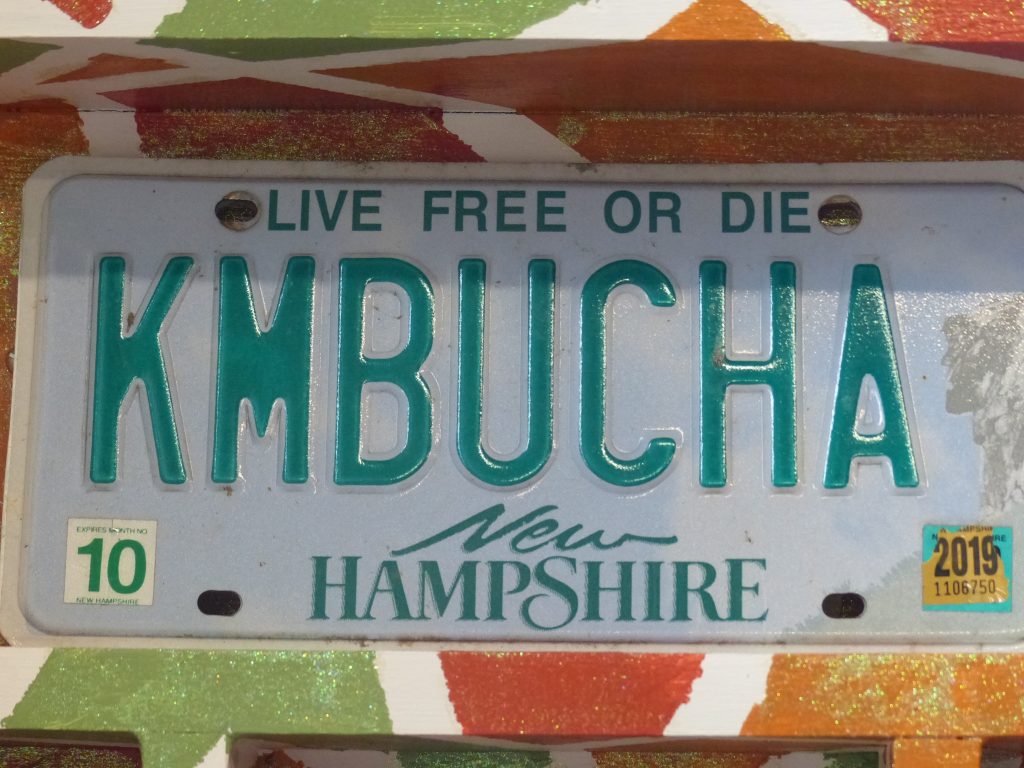 Slowly, the idea of a kombucha business started to unfold as well.

Helen moved from making kombucha in mason jars to a ten-gallon crock and shared her creations with coworkers at the restaurant where she was a bartender. The reception was positive, so she took a batch to Farm-A-Q, an annual local food tasting event in the Seacoast. Lined up among a row of local breweries, she received more positive feedback and people were asking where they could buy local kombucha.

Intrigued by their questions, Helen sought the answer.

“I found it was common on the West coast, but no one in New Hampshire was making or selling kombucha commercially.”

With the help of a friend from UNH Organic Garden Club days who knew brewing at scale and the Regional Economic Development  Center, Helen researched whether it was a viable business idea.

For four years, it was a hypothetical journey of business planning and researching equipment and potential spaces, but by 2019, Helen had secured a business loan and raised money from family and friends. On February 22 of 2020, she signed a one-year lease in the mills.

On March 22, exactly one month after signing the lease, the pandemic arrived in New Hampshire and Helen was laid off from her bartending job where she had planned to work as a safety buffer while things got started with the brewery.

“If those two events had happened in a different order,” Helen says, “I wouldn’t have done it.”

Thankfully, the brewery was fated to be auspicious, a word meaning something “that produces a favorable outcome.” With a tremendous amount of hard work, Helen and her team persevered and the brewery officially opened in November 2020. Though the dream of the beautiful, community-centric space would have to wait as the pandemic meant to-go orders, home delivery, and curbside pick-up.

“In the beginning, there was a lot stacked up. It takes a lot of time and exposure to be on people’s radars,” Helen says.

Helen credits the support she received from the restaurant owners of the Seacoast as integral to the businesses early and continued success. They bought kegs and cases which provided steady wholesale income and increased brand recognition. 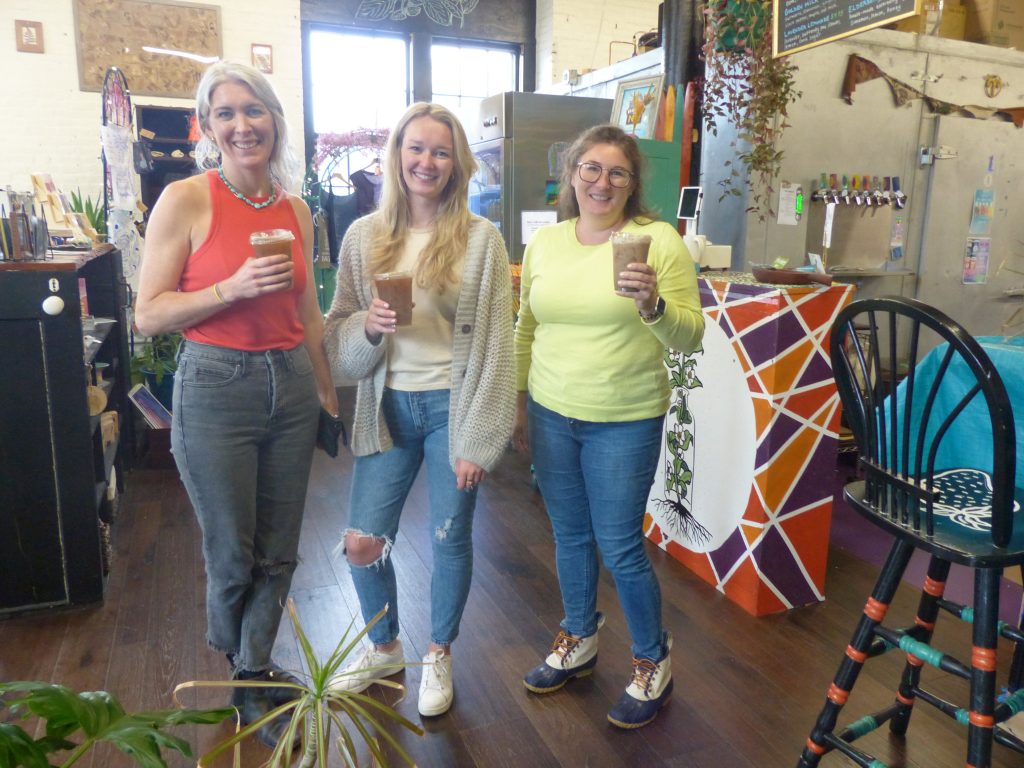 Now, the doors are fully open and Auspicious Brew is becoming a hub of community gatherings and events.

A partnership with Dos Mexican Eats, located just down the hall, allows patrons to order food at the Mexican restaurant and eat it at the brewery. There is live music and open mic nights, “Bend & Brew” yoga classes (Helen is also a certified yoga instructor), and tarot readings. There is also the “Stellar Sips Series” – a monthly event that features a participatory activity like painting, collage, or storytelling that highlights each astrological season.

The brewery is mobile, too, attending both the Portsmouth and Exeter Farmers’ Markets which has increased their exposure to the public.

In addition, Auspicious Brew’s kombucha—they make over five-hundred gallons each month—can be found at over eighty-five retailers across the Seacoast, including many independent grocers, boutiques, Emery Farm, Tendercrop Farm, and restaurant and bars that source local food like The Press Room, Flatbread, Chapel + Main, and Black Trumpet.

It’s this combination—of community and food—that is the real magic of Auspicious Brew. The product quenches our thirst and nourishes our health. The space invites people to come together and gather. The company works with other local businesses in a genuine and symbiotically beneficial way. Even the concept of local kombucha gets people talking about local food and what is available here in the Seacoast.

It was a long road to get to this point, but we are here to raise a kombucha-filled glass to this very auspicious outcome. Cheers! 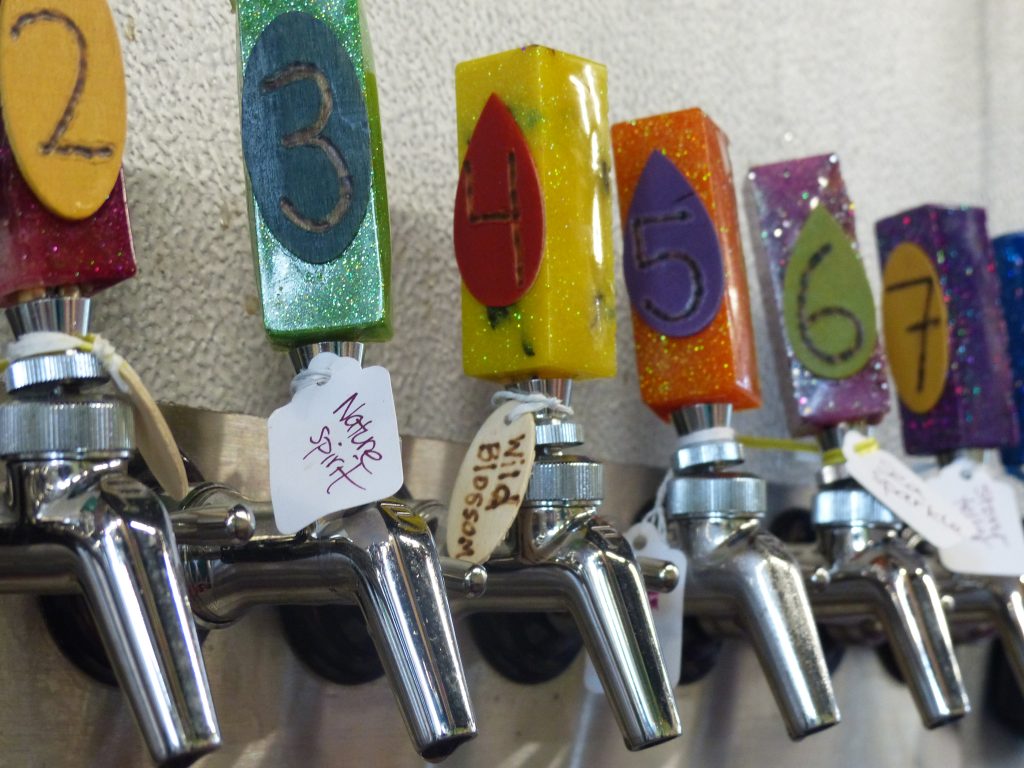 Bonus Fun Fact: The UNH Organic Garden Club (OGC), along with the Community Dinners at the Waysmeet Center, was a catalyst into local food for both Helen and this author, who met in college and worked at the OGC together and met again, fifteen years later, for this article.